I know that I’ve talked about this a bunch before but one of my main goals in 2019 is to try and finish or just get caught up on as any series as humanly possible. I’m so bad at starting them and maybe even reading a sequel but then never actually completing them, even when I own all the books. But this is the year that we change that! And I decided that I needed a little push so I’m doing my own little readathon. My schedule is different every week and I always end up having to work on the weekend when other readathons are announced so I’ve just picked which week works the best for me and we’re going with it. 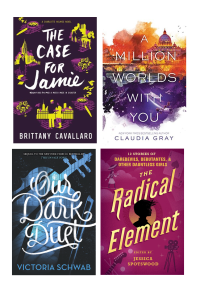 So I’ve decided that I’m going to do this from April 20 – 28 since it’s the week that I have Monday and Tuesday off. I get the point of weekend readathons but my best friend is a teacher so the weekend is pretty much the only time I see her since I have to go to bed really early when I’m working. This gives me Sunday night and then all Monday and Tuesday to read as much as possible, and then I’ll be off on the Saturday and Sunday so plenty more time if I don’t have plans. (I realized after scheduling this that this is actually Easter weekend I plan on starting it, which means I’ll loose some time on the weekend but I should have an extra day off later in the week, so really this is getting even better)

Now for the books that I want to try and get to, there’s so many series that I have that I can continue but there’s also a few that I know I need to reread the first book so that’s a bit of a pickle. I don’t know if this is the time to do any rereads or if I just want to stick to the ones that I can carry on with. I know that I for sure want to finish The Case for Jamie by Brittany Cavallaro, A Million Worlds With You by Claudia Gray, Our Dark Duet by Victoria Schwab, and This Radical Element by Jessica Spotswood. There’s definitely more but I know that I’ll fly through all of these so they’re my guaranteed picks.

Also. If I can manage to reread Legacy of Kings by Eleanor Herman earlier in the month (I know that this is only going up a week in advance but I’m writing it in late March so heyyy) then I will definitely carry on with that series because I’m so excited for it. Also Now I Rise by Kiersten White. And Their Fractured Light by Amie Kaufman and Meagan Spooner. Ugh there’s just so many! But I feel pretty good about getting to a decent number of these, especially since I’m telling everyone is advance so they won’t expect me to emerge from my room or make plans. It’s gonna be great.

So there we go. I’m feeling so determined to cross a bunch of these off of my list! And once I get caught up with a bunch of these then I can focus on buying some of the other series that I need to finish it. It just never ends does it?